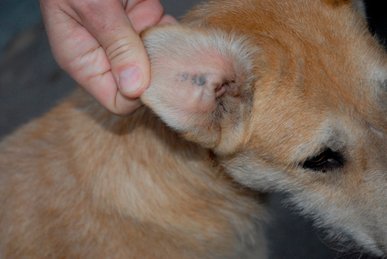 The dogs released by the shelter will be permanently marked using an ear-notch to identify them as having been sterilised and therefore not to be recaptured. The existence of a large sample of permanently marked roaming dogs can be exploited to estimate the current size and spatial distribution of the population and monitor its change over time, as illustrated here maps. The value of the markings is greatly enhanced if they are individually distinct, in particular it allows the survival of the released dogs to be estimated, potentially by sex and age. Tattooing the inner surface of one of the ears is one way of individual marking and the database includes a mechanism for generating enough compact tattoo codes for all dogs released by one or more shelters within a city to be individually marked.

The codes consist of a combination of digits 0 to 9 and letters A to Z, with those letters that may be confused with digits (e.g. letter Z may be confused with digit 2) removed. The 28 remaining letters and digits provide for 28 to the power n different codes, where n is the length of the code used (e.g. 21952 different codes using three digits/letters).

To set the range to be used select "set tattoo range" from the Main Switchboard. The number of codes in the currently selected range will be displayed, the next window then allows the number of characters and the range for the first character to be selected and displays the new corresponding number of different codes

Having selected the number of characters and the range for the first character, initiate generation of the codes by selecting "go to Data Entry" from the Main Switchboard, selecting "enter/edit register data" and typing the first code into the "tattoo" field of the last record. From then on codes will be generated automatically in each new record and included in the operations schedule for application to the anaesthetised dog.  When all the distinct codes have been generated the same sequence will be generated again so the number of distinct codes must be large enough to avoid that happening within the maximum lifespan of a roaming dog.

Ear-notched dogs may occasionally be collected accidentally or to receive veterinary treatment at the shelter.  Any existing tattoo should be entered in that field of the "edit data imported from phone to register" form.

To optimise the value of the individual marking for estimating survival the application of tattoos needs to be maintained once started. Similarly, the date from which tattoos are applied needs to synchronised between different shelters.